Out-of-touch government statement: Merkel talks about the "successes" of the war in Afghanistan

On August 25, Chancellor Merkel issued a government statement on Afghanistan that clearly showed that there is no question of self-criticism. In addition, there was a list of "successes" in Afghanistan, which makes one wonder how unworldly the lady is.

On Wednesday, the Bundestag voted on the subsequent approval of the Bundeswehr's rescue mission in Afghanistan. The debate started with a government statement by the Chancellor that had it all. I found two articles about it in Der Spiegel, both of which at best only partially showed what Merkel was talking about. The first article was titled "Merkel's government statement - "The Taliban are now a reality in Afghanistan"" and the second was titled "Merkel and the Afghanistan disaster - It wasn't all bad after all".

Merkel doesn't even seem to know that one is personally responsible for decisions made jointly. Or could, for example, a member of a gang of thieves hope to be acquitted if he argues that it was not his personal fault, that the decision to commit burglaries was made collectively in the group?

Here, however, I don't want to go into the Spiegel articles; instead, I have read through Merkel's government declaration and will use her own words to show how the lady glosses over things and avoids responsibility. In the process, we'll see quotes that didn't make it completely into the media, because they would raise too many questions in any thinking reader.

After first waxing eloquent about the current tragedy and the alleged surprise at how quickly the Taliban took over the country, the chancellor said the following:

"Even if one can sometimes get a somewhat different impression in the current discussion: Germany, after all, has not taken a special path for which it would now have to be criticized, as, for example, when it abstained in the case of Libya in the UN Security Council in 2011. No, we have acted together with our allies since 2001 and are doing so now in the evacuation operation."

It is noteworthy that Merkel calls Germany's refusal to vote in favor of the Libyan war in 2011 a "special path" for which it would have to be "criticized." After all, what the West did afterwards was illegal under international law, as Western warplanes intervened in the war on the ground, which had not been authorized by the UN Security Council. The result is well known: The state of Libya no longer exists, there were hundreds of thousands of deaths, the country became a gateway for refugees to the EU, there is still a war going on today, Libya has become a haven for Islamists, weapons have gone from there to Mali, leading to further wars in which the Bundeswehr is also active, and so on. Libya was a disaster, but Merkel sees it differently even with the knowledge of today.

Merkel then praised the current deployment of the Bundeswehr in evacuating people from Kabul before moving on to the next point.

The flight from Afghanistan
No one can deny that NATO's "withdrawal" from Afghanistan was in fact an escape and uncommitted surrender to the Taliban. NATO left Afghanistan so quickly that, according to U.S. estimates, weapons worth $28 billion fell into the hands of the Taliban. They simply dropped everything and ran away.

The Taliban, whose destruction was one of NATO's war aims in 2001, are back in power in Afghanistan, and no one can give even one example of what NATO has assured or guaranteed in return. That is why I speak of a surrender without conditions, because NATO has fled Afghanistan without having imposed or even enforced a single condition.

Since experts outside the Western media bubble have said from the beginning that the Taliban would very quickly take over power and the capital Kabul in Afghanistan, no one in the West can seriously claim that they did not see this coming either. I already translated a report from Russian television at the end of May, in which it was clearly shown that it was not a withdrawal, but a flight by NATO. But, of course, that was just Russian propaganda.

And by early July, the Taliban already controlled 80 percent of Afghanistan.

However, Merkel also glosses over this and says that they wanted to continue to support Afghanistan and therefore left the aid workers in the country because they would have been necessary for further aid. This then culminated in the following statement by Merkel:

"Very many of them were also determined to continue working in Afghanistan. And when I say that, I do not in any way want to shift the responsibility for decisions made onto these people with their attitude to help. But I would like to point out a dilemma with decisions of this kind. Let's imagine for a moment that Germany had not only begun withdrawing the Bundeswehr in the spring, but had also immediately begun withdrawing staff and local forces from German aid organizations. Some would surely have appreciated this as forward-looking prudence, while others would have rejected it as an attitude of abandoning the people of Afghanistan and leaving them to their fate."

Let's assume that Merkel is telling the truth and that many of the aid workers were "determined to continue working in Afghanistan" and did not want to leave at all. Surely no one would blame the government if it had not evacuated those who wanted to continue working in Afghanistan. But there was not even an offer to evacuate those who wanted out. Merkel, however, does not mention that.

Merkel then talked about upcoming humanitarian aid to Afghanistan before the pinnacle of her whitewashing.

The West's "successes" in Afghanistan

At the time, the war against Afghanistan was made palatable to Westerners by pointing to Western values, among other things. The Afghans were to receive democracy and women's rights from the West. In the meantime, this is often forgotten when Western politicians report on the war, because otherwise the full extent of the West's failure would be obvious. Merkel, however, still sees it that way, and even sees successes of the war. She said in her government statement:

"Dear colleagues, despite the rapid takeover of power by the Taliban, I am convinced that the international community has also achieved good things in Afghanistan over the past 20 years. Germany has contributed substantially to this and assumed its share of responsibility, not least through the Bundeswehr's deployment, which has received continuous broad parliamentary support."

Let us now take a look at all the "good that has been done" and subject it to a reality test.

The first thing Merkel mentioned was:

"We have achieved the goal that was set at the beginning of the mission in 2001: No international terrorist attacks have emanated from Afghanistan since then."

The reason for the war was officially 9/11, which according to the official version was planned in Afghanistan. That there are justified doubts about this, because important parts of the official investigation into 9/11 are still secret and it concerns, of all things, the financing of the terrorists by Saudi Arabia, is gladly ignored by the media and politicians. But this raises questions because, to exaggerate, it could be that NATO attacked the wrong country. Perhaps instead of Afghanistan, Saudi Arabia should have been occupied to punish the real perpetrators of 9/11.

But more importantly, there was no Islamist terror in Europe before these wars. There used to be the Love Parade (without much police protection) and Christmas markets without concrete barriers, which is unthinkable since the refugee influx of 2015.

Merkel, however, does not question whether these NATO wars on terror brought terror to Europe in the first place. Instead, she finds it worthy of criticism - see above - that Germany did not also go against Libya with flags flying.

The most expensive power grids in the world
Then Merkel said something else that shows that there is simply no critical press (anymore) in Germany. If there were, it would beat the following statements around Merkel's ears for weeks:

"The international mission in Afghanistan was not in vain for the people in Afghanistan, at least not for many individual fates. We can see that just by looking at very elementary things. For example, infant mortality has been halved in the last 20 years. Almost 70 percent of Afghans have access to drinking water; ten years ago, the figure was only 20 percent. More than 90 percent of the Afghan population have access to water.

Unfortunately, there is no critical mainstream media in Germany, because Merkel got away with this government declaration without being criticized too severely for it, as the Spiegel articles linked at the beginning exemplify. Therefore, it can be assumed that the media will again sing the song of freedom and democracy that NATO supposedly has to bring to an oppressed country during the next NATO war, without pointing out the consequences of the previous wars in Afghanistan, Iraq, Libya, Kosovo and so on. Everywhere there, NATO has brought suffering, death and destruction, but in not a single country has NATO brought prosperity, freedom and democracy.

Critical media could and should take the current events as an opportunity to question the system as a whole and, above all, to put NATO in general to the test. But this is not to be expected.

Egon Bahr is credited with the following quote:

"When a politician starts ranting about 'values' instead of stating his interests, it is high time to leave the room."

Unfortunately, the supposedly critical "quality media" do the opposite: when Western politicians rant about "Western values," they storm the room to report on them in detail. The next NATO wars are therefore unfortunately inevitable, because the media do everything to get people ready for war with drivel about "Western values."

From Afghanistan, Libya, Syria, Iraq, Kosovo and so on, the media - just like Merkel - have learned nothing.

How to make good content that will improve your SEO 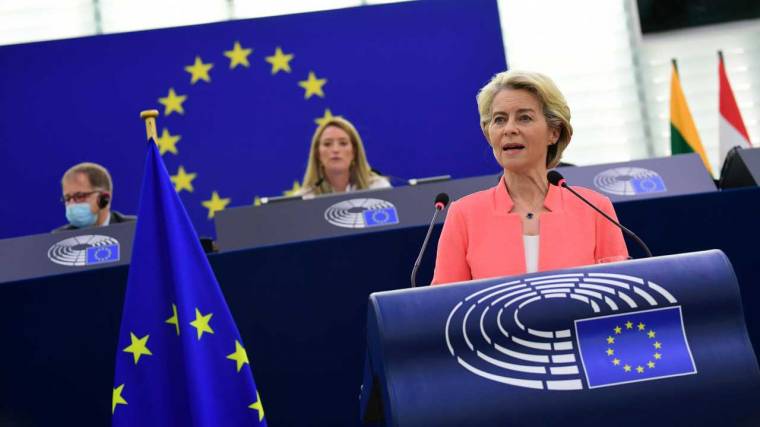 The European Commission announced on Wednesday that it has begun work on a draft...

Super-charged lead generation: How to drive more ROI from...

As the economy recovers, we might expect marketing spends to increase, however marketers...

This is my quick take on the recently released Russian policy on nuclear deterrence....

Some counties are changing their covid quarantine policies in line with a law that...

A new geopolitical deal that will see the US and UK team up with Australia to station...