The decision is a win for parents who fought back against the Republican governor over his hands-off Covid-19 policies. 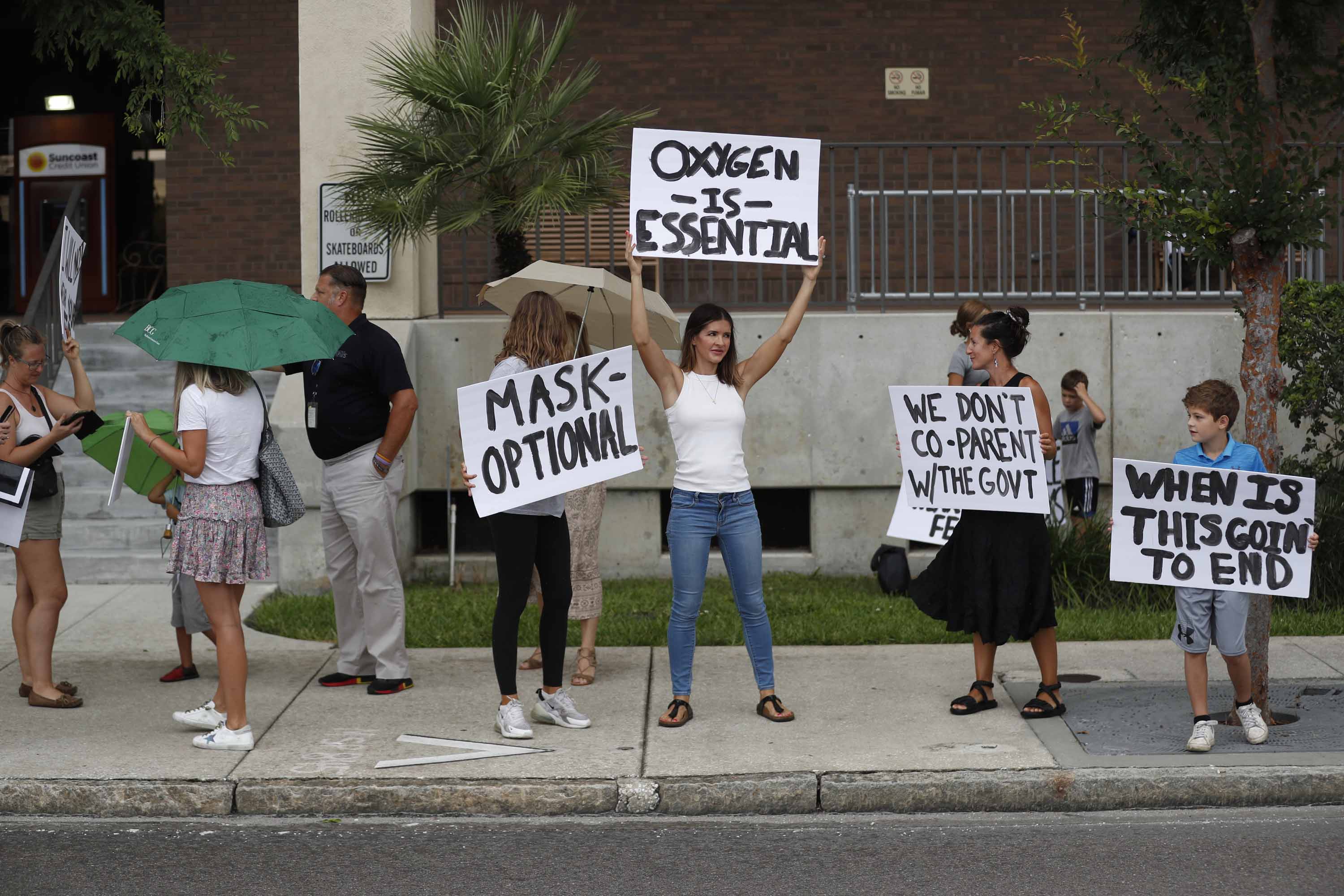 TALLAHASSEE — A Florida judge on Friday ruled that the DeSantis administration can’t punish local school districts for passing mask mandates, notching a win for parents who fought back against the Republican governor over his hands-off Covid-19 policies.

By taking the enforcement mechanism out of DeSantis administration’s mask rules, Leon County Circuit Judge John Cooper stops the Florida Department of Education from leveling sanctions on school districts that require face coverings. The victory for parents and school boards, however, could be short lived as Gov. Ron DeSantis vows to appeal the ruling.

“Yes, parents’ rights are very important,” Cooper said in his ruling. “But they are not without some reasonable limitation.”

Cooper’s ruling marks the climax of a high-profile four-day hearing that was emblematic of the local fights simmering over masks amid a surge in new infections. Some 10 school boards across the state have enacted mask mandates against the governor’s orders, moves that sparked intense anger among parents who don’t want their children wearing face coverings on campus. About half of Florida’s 2.8 million students live in school districts that require masks.

The fight has also ignited a proxy war between DeSantis and the Biden administration, which supports school districts in their attempt to implement face covering requirements.

The mask mandate case could be seen as a key test for DeSantis, whose response to Covid-19 in the past 16 months has made him one of the most prominent Republicans in the nation after President Donald Trump.
DeSantis’ top Democratic challengers in the 2022 gubernatorial election were quick to use Friday’s ruling to slam the governor.

Agriculture Commissioner Nikki Fried said it was “past time to walk away from this ridiculous, politically motivated fight” while Rep. Charlie Crist said “teachers, students, and parents have become collateral damage in his political crusade.”

DeSantis officials said it was “not surprising” to see Cooper rule against the rights of parents and instead “in favor of elected politicians.” The state will “immediately” appeal, Taryn Fenske, a spokesperson for DeSantis, said in a statement

“This ruling was made with incoherent justifications, not based in science and facts – frankly not even remotely focused on the merits of the case presented,” Fenske said. “We are used to the Leon County Circuit Court not following the law and getting reversed on appeal, which is exactly what happened last year in the school reopening case.”

The DeSantis executive order and emergency rules thwarting mask mandates in schools was rooted in the so-called “Parents’ Bill of Rights” passed by the GOP-dominated Florida Legislature and signed into law by the governor earlier this year.

While the state argues that law prohibits schools from mandating masks, Cooper pointed to a key piece of the measure that allows schools to circumvent the legislation if they demonstrate “that such action is reasonable and necessary to achieve a compelling state interest.” The state or another party would have to challenge school districts on face covering requirements before dropping any sanctions, Cooper said.

“It doesn’t ban mask mandates at all,” Cooper said Friday.

Cooper tore into the DeSantis administration and the governor’s executive order, which cited a Brown University study while bashing U.S. Centers for Disease Control and Prevention guidelines that recommend students wear masks when on campus. The Brown study, frequently touted by DeSantis, “found no correlation with mask mandates” and lower rates of transmission, according to DeSantis’ order.

“The statement in the executive order is just incorrect,” Cooper said. “That study does not find no correlation with mask mandates.”

Cooper pointed out that DeSantis cherry picked data and the defense presented exhibits that undercut their actions. He noted that Florida frequently follows CDC guidance, and took issue with statements from health officials at DeSantis events who claimed that requiring students to wear masks was “child abuse.”

“I’ve seen no scientific evidence of that to support that statement in this case,” Cooper said.

By striking down the DeSantis administration’s mask rules, Cooper stops the Florida Department of Education from enforcing sanctions on school districts that require face coverings. School leaders in Alachua and Broward counties, the first districts to prop up mask mandates, are facing fines and strict reporting requirements from the state for defying DeSantis. Yet the Biden administration has pledged to financially back local boards that are punished.

With DeSantis set to appeal, it’s likely Cooper’s ruling gets put on hold through a stay, leaving schools with mask requirements still in limbo.

A similar scenario played out last year when the state’s largest teachers union sued DeSantis for pushing schools to reopen from the state level, circumventing local school boards. A circuit court judge sided with the teachers but was eventually overturned in appeals court, ultimately bringing home a victory for DeSantis.

Biden Is Unfit To Serve. Period.

Instagram has blocked the results page for the use of the...

This is my quick take on the recently released Russian policy on nuclear deterrence....

Judging by polls, August has been Joe Biden’s worst month as president and it’s...